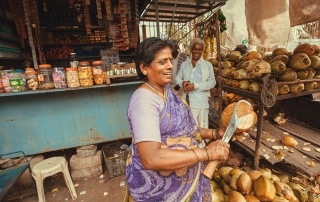 Woman cutting a coconut to extract milk and coconut oil in Belur, India.

The July, 2020 issue of the Journal of The Association of Physicians in India has just published an article titled:

Coconut Oil and Immunity: What do we really know about it so far?

It is refreshing to see Indian physicians turn their attention to Ayurvedic natural medicine, and its 4000 year history of recognizing coconut oil as a powerful natural medicine.

Ayurvedic health predates modern western medicine and the pharmaceutical industry by several thousand years in India. The poor people of India have for far too long been the human lab rats for western drugs and vaccines, and is a key country where Bill Gates has promoted and developed new vaccines as part of his population control agenda.

From the Abstract of the study:

Coconut oil as health oil was recognized in Ayurvedic medicine almost 4000 years ago. The same health effects were also attributed to the mother’s milk in ancient literature. Modern research has now found a common link between these two natural health products – their lipid content. The medium chain fatty acids and monoglycerides found primarily in coconut oil have miraculous healing power which act as natural antibiotic and also help modulate immunity.

The information discussed in this review explains that coconut oil, either topically applied or ingested, gets broken down to release Lauric Acid and Monolaurin – known anti-microbial agents.

The studies reported in literature are discussed to evaluate the antiviral, antibacterial and antifungal benefits of coconut oil.

Not only does coconut oil metabolites have antimicrobial activity but also these remarkable derivatives have been shown not to cause resistance organisms to appear. The anti-microbial mechanistic action also helps activate the anti-inflammatory nature of the immune response in human body. In vitro, animal, and human studies support the potential of coconut oil as effective and safe immune-nutritive active. New and exciting health and industrial uses of coconut oil and its derivative are possible.

Never before in recent times has the recognition of the positive health effects of coconut oil been stronger. And never before in the history of man is it so important to emphasize both need and efficacy of natural products known for their safety proposition. Immunity has been a buzzword in the current scenario and the demand for modulating immunity with natural means has been so unprecedented and so ubiquitous. Coconut oil and its value added forms can contribute to a more vigorous and healthy future.

Coconut oil has a long history of fighting viral infections effectively, and while a vaccine was never developed for HIV, studies on coconut oil found it effective for HIV/AIDS over 20 years ago.

This study involved 15 HIV patients, aged 22 to 38 years, 5 males and 10 females, for 6 months. There was only one fatality and 11 of the patients showed higher CD4 and CD8 counts after 6 months.

In another study, HIV subjects with CD4+ T lymphocyte counts less than 200 cells/microliter were divided into a VCO group (45 mL daily) and control group (no VCO).

Seeing physicians in India return to their Ayurvedic natural medicine roots is very positive. If they can band together and fight against the global pharmaceutical cartel operated through the World Health Organization, they will have a better chance at resisting the New World Order which wants to reduce the world’s population, especially in India.

Here in the U.S., I was the first one to import a Virgin Coconut Oil edible oil into the U.S. from the Philippines back in 2001. Only two national suppliers were even selling coconut oil as a dietary oil at the time, and they were both highly refined, mass produced coconut oils.

You could not find coconut oil in stores at all, unless you were visiting an ethnic neighborhood grocery shop from India or the Philippines.

The reason is that since the 1970s, official USDA nutritional advice is that coconut oil is unhealthy, due to the fact that it is mostly saturated fat, wrongly claimed to cause high cholesterol and heart disease.

This dogma has been thoroughly debunked in the scientific literature over the years, but it remains official USDA policy until today.

Our peer-reviewed research section at CoconutOil.com is still probably the best collection of scientific studies on coconut oil anywhere today.

Back in the early 2000s when Internet searches were still un-censored, we were able to educate Americans on the truth regarding coconut oil and all of its wonderful health benefits.

In 2005 the FDA issued a warning letter against us stating that we were selling “unapproved drugs” due to our links to peer-reviewed literature and customer testimonials on how Virgin Coconut Oil had changed their lives.

As a result, we had to take down all of our research and customer testimonials from the website where we were selling coconut oil, and put it up on a separate website (which today is CoconutOil.com) completely separate from our business where we sold coconut oil.

By that time we had probably spent well over $1 million dollars in advertising over the course of several years educating American consumers on the lies about saturated fats, and the truth about coconut oil.

Today, one can walk into almost any grocery store and now find coconut oil, although it is still demonized by the USDA, the American Heart Association, and many other Big Pharma aligned government bodies and associations.

The reason why the U.S. Government and Big Pharma will never change their views on coconut oil, is because to admit that the lipid theory of heart disease is wrong, is to admit to harming and killing millions of Americans over the years by artificially lowering their cholesterol with statin drugs, the biggest income producer for the pharmaceutical industry all time.

Of course today, all the money is in vaccines, as most of the blockbuster drugs, including cholesterol-lowering statin drugs, have long since lost their patents and can be purchased as cheap generics.

The industry needs fresh new drugs and medical products to maintain their control over humanity, and the most recent example is what they did to Hydroxychloroquine, which resulted in untold deaths of many people, in order to protect Dr. Fauci’s new drug, Remdesivir, which has a price of $3,120.00.

About the author: Unlike many people who write about coconut oil by simply reading about it, Brian Shilhavy actually lived in a coconut producing area of the Philippines for several years with his family, observing firsthand the differences between the diet and health of the younger generation and those of his wife’s parents’ generation still consuming a traditional diet. This led to years of studying Philippine nutrition and dietary patterns first hand while living in a rural farming community in the Philippines. Brian is the author of the best-selling book: Virgin Coconut Oil: How it has changed people’s lives and how it can change yours!

Read the Virgin Coconut Oil eBook on Your Mobile Device!